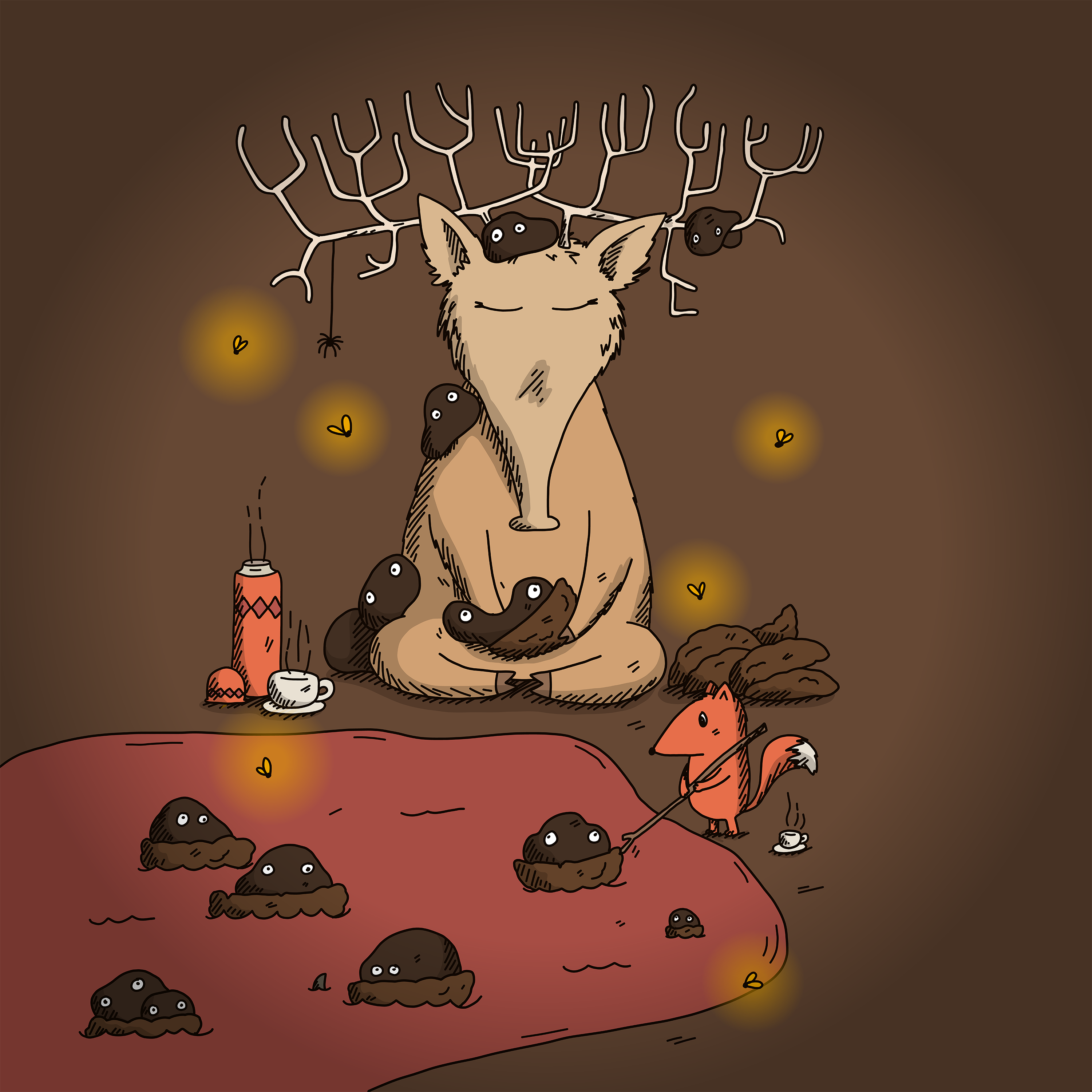 Hi, my name is Kendon and I am an INFP male suffering with… Well a lot of things. Hear me out, yeah?

I’d say the most prominent suffrage I have has to be depression. The reason is very… Elaborate to say the least. I’d like to say it all happened when I was about 6 years old, so roughly 13 years ago. Young boy, able to walk, talk, dress himself somewhat well enough, feed himself if necessary.

That’s when I started to realize my dad was abusive. VERY much so. Not to mention a deathly toxic alcoholic. He beat me, my mom, and my sister every chance he got and that… Man enjoyed every second. He centered around me and my mom more so. He said my sister wasn’t his and he shouldn’t, and I quote, “Give a shit about some little skank that came from her whore of a mother.” Day in and day out, beating after beating. Belts, knives, kitchen utensils, tree branches. Anything he could get his hand on and lift with some ease, he used to make my mom and I’s life hell.

One day really sticks out for me. I remember the date perfectly. August 9th, 2004. The day he not only threatened to kill every one in the house, himself included, but he also beat me worse than before. He cut me up, beat me down to pulp almost, hung me by my wrists from the banister of the stairs. I can still feel the rope sometimes, digging into my wrists and twisting up the skin, shredding what skin was left.

He got my face pretty good, still a few scars left, and its 13 years later… This continued for three years. Daily. Every time I turned around, I thought that today was the day I die to this man.

Three years later, mom finally got the courage to take action against him and get the divorce. Some kids are sad and THAT causes their depression. Not for me. Thats a breath of fresh air. Oxygen in my lungs. Finally, I could breathe and not be afraid for my life every second of every day.

That was very short lived once we got to her mother’s house.

My grandmother. I wouldn’t even call her that. Much like my father is referred to as sperm donor, she is my mom’s mother. I haven’t called her grandma in a good long while.

However, behind my mother’s back, the abuse continued. A little… Softer than my sperm donor, but still. A new means of torture was introduced. Burning. She’d light a candle, one without a container, just candle, and put it out against my skin. She’d sometimes just hold the lighter to my skin, lit or so heated to the point where it imprinted. She’d purposefully close my body parts in doors and cabinets. Anything with a handle and hinges really. She pushed me into a lawnmower and made me burn a majority of my arm on the engine. It was the usual otherwise, savage beatings behind people’s backs, forcing me worse if I told anybody. To this day, this moment, I have told nobody. Nobody except whoever reads this. On top of everything my grandmother did, I was still forced to go and see my dad every so often. So it was abuse from both parties still. For three more years it continued. Worse yet.

It wasn’t but a year later that I tried ending it… My first suicide attempt. July 19th, 2008. I was 10 and I tried to take a variety of my grandmother’s pills, just to see what would happen. If it would truly end it all… It failed, of course. Attempts after that seemed endless… Cutting myself, threatening to blow my brains out, wanting to leap off my roof or higher, holding my breath till I passed out. Every way you thought of to end it, I undoubtedly tried it.Especially cutting… There’ll be days where I still do it. A few here, a few there. If the days are bad enough though…. I can’t keep track of how many there are. My grandmother and father weren’t the only reason I wanted to do that.

Say hello to the ugliest face of the abuse world… Rape… June 17th, 2009. We went camping with my uncle Ron and his sons, Matthew and Jt. It was them three, me, my mom, my grandmother, and my cousin Brayden. Every one went to sleep, I thought I’d get a good night’s rest…

My tent was broke into, the four of them looming over me… Each taking their turn making that night the one I would dread for years to come… I still do… I’ve only told one other person and even then it wasn’t the whole truth… I couldn’t tell her all of it… I didn’t want to believe it even happened. They tossed me around, different positions, different sizes being pushed where they weren’t supposed to be… Me wishing nothing but for them to kill me afterward. Cover it up as an animal attack or something… That continued for another year behind everybody’s back.

I was 12 when we left my grandmother’s. My mom being able to afford her own place and finding a new man. So that ended contact with my father and that side of the family altogether. That was whenever it was memories finally catching up with an older me.

And the suicide attempts continued. Years of sitting in my room crying myself to sleep. My eyes feeling like they were bleeding cause I never slept. Everytime I closed my eyes all I saw was them looming over me or my father getting ready to beat me or even my grandmother ready to burn me at a moments notice… I had nightmares instead of dreams. Wishes for death instead of praise for life. Wanting it to be over, the pain to stop… Yet too scared to try anymore. The last attempt was a handful a pills and they didn’t even make it to my mouth. I crushed them in my hand, slinging them across the bathroom and screaming, crying out for help and begging for the pain to just go away…

I would continue this story with the various heartbreaks. Girlfriends and small flings that… Really don’t mean much to me, save for two people. But I feel like its not necessary. Some was more physical abuse. Others mental. Most or all emotional, save for the two. Those two wouldn’t have dared lay a finger on me. They cared too much yet… It was the wrong time. We wouldn’t have worked at that time and it made me hopeful for the future for once… That someday, I’d be able to feel that happiness again. On top of sleepless nights, demons screaming at me and telling me i was worthless and I should’ve pulled the trigger or made sure the noose was tighter. Something… It all seemed essentially worthless. Life.. seemed worthless. As if there was nothing there for me anymore. I was hoping that when I got out my parents house that… That’d be it. That would be the time I’d do it… To truly end it all…

It was after I graduated that everything began to change… For the better seemingly… I was scared, jumping into good things and then, after awhile, ruining them… I was so scared that I took no precaution. It was entirely new to me. I felt happiness, truly. I felt it and took it for granted at the same time…

Only then did I realize that happiness doesn’t truly come from one select person. Granted, that one person, no matter the circumstance or relationship between the two of you, will be such a large influence on your life that you want to never let go of them. They’ll make you stupendously happy… However, happiness… Its two vastly different forms.

One, from friends. The truest of friends who are with you no matter the circumstance. The ones that, even through hell and high water, through the hardships you go through or put them through, they have your back no matter what.

The second, and this one took me A WHILE to realize, is from yourself. This one wasn’t fully introduced until here recently. But you can never be truly happy until you quell what demons reside in you and come to terms with your past. Its called the past for a reason… You need to leave it where it lies and continue on with your life. Learn from it and continue to live! Take life in strides rather than steps

Take life in and simply experience it! Breathe in every last atom of Oxygen. See every last inch of Earth. Touch the sky and pierce the heavens! Take life by storm!

Show it that you can’t be stopped, no matter how close you were before…

You just gotta show it who’s boss is all.

My name, once more, is Kendon. And I hope my story can help some people. No matter how minuscule it may seem. Keep smiling, lovelies. It gets better, I promise.