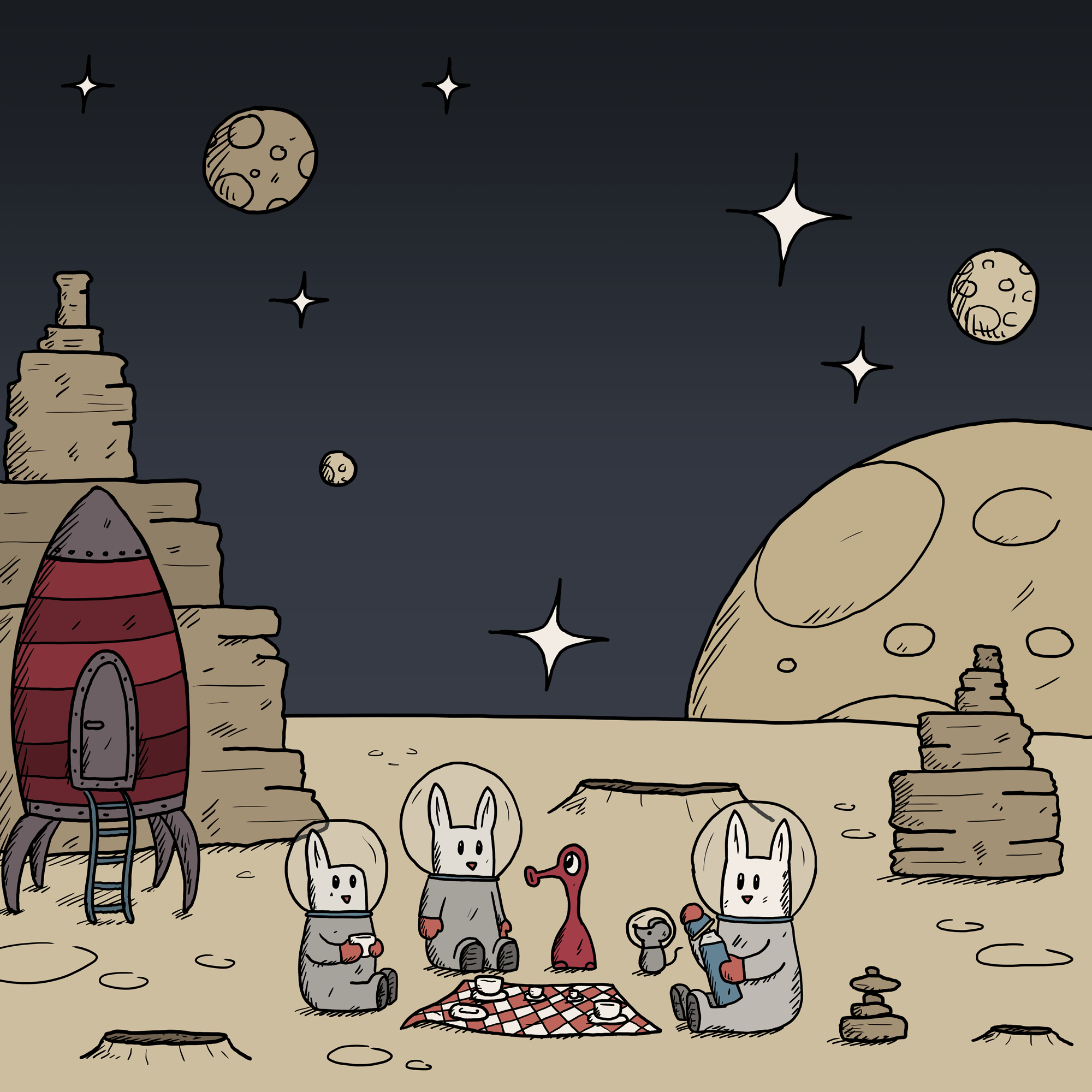 Poppy, a 8-years-old rabbit, lives in the forest alone, cause her father and mother have passed by last year. At first she really can’t accept this crutal fact, until she met Cindy.

Cindy, as old as Poppy, lives alone as she knew the world. That day when Poppy met Cindy, she was crying in a thick growth of grass. Suddenly, she heard a sweet sound.

Poppy was too scared to do anything but shriek, and then lose her consciousness when she turned her head back, and leaving Cindy with a big mask of tiger on her face behind. Cindy was all in a fluster when she saw Poppy passed out. She done nothing but holding Poppy’s left hand. After 15 minutes, Poppy opended her eyes and saw a pretty girl besides herself.

”Who are you” she said in a weak sound.

“I’m Cindy. I really sorry for what I have done before. I just want to show you a surprise and make you smile.“ Cindy said

Poppy gazed at Cindy and she could find the remorse in Cindy’s eyes.

“That’s OK. I was just too excited“ Poppy said

“aha? Really? and please to meet you. I think we are friends now” Cindy said with a big smile.

“Friends?” Poppy can’t help but crying. In the past 8 years, she never had a friend. No one will stand by her except her parents and no one liked her, as she only has one ear.

“Just too excited” Poppy answered and smiled to Cindy.

From that on, Poppy had her first friend of her life. They ate together, slept together and gossiped together. They told each other what had happen to them, included their families, their formerly life and the only one ear of Poppy.

“Before I meet you, I always think that I am the coolest girl in the world. Because I can live alone but happy. I can do everything what I wish to. But when I meet you, I find that I am cooler and happier than before” Cindy says while she is climbing the apple tree

“Cindy, watch out, please. It’s dangerous.” Poppy looks up and says to Cindy.

”I’m happy to hear what you have said, but I will be happier if you can pay more attention to your safety while you are climbing, dear”

Day by day, Poppy live happily with Cindy and she believes that it will be all the time. Until Jack appears.

One sunshine day, when Poppy and Cindy are playing football in the square, one handsome boy catches the ball and said to Cindy, ”

Cindy looks at him.

“OMG, Jack. You finally came back. I’ve missed you so much”

And they hug each other.

Poppy, standing behind them. can’t say any word and doesn’t know how to speak out.

And then, Two rabbits turns to three rabbits. But the happiness doesn’t turn to bigger.

Poppy begins to think that Jack and she, which will be better in Cindy’s mind. Why does Jack appear?

Gradually, Poppy’s smile on her face is less and less. She hates to see Cindy and Jack, expecially when they smile. She feels lonely again, and begin to lock herself in the darkness again.

One night, when Poppy woke up in the midnight. She found Cindy was sleeping near herself and looking at herself.

Cindy held her hands, smiled and said in a soft sound

“Poppy, I have to leave tomorrow. I just want to tell you I love you, and I will be in your side all the time. The world is colorful, please stop locking yourself in your own dark room. Jack is our friends, you can depends on him and I suer you will feel safe when you stay with him. Poppy comes out, join in the world.”

“Please don’t leave me alone, Cindy, please don’t. . . ” Poppy cant say anything but cry. And then she tried her best to open her eyes, she saw nothing. Thank Godness, It was a dream.

In the second day, Poppy woke up early and planed to look for Cindy. When she just came into Cindy’s room, there came out Jack.

“Cindy has gone, Poppy. here is the letter she wrote for you”

After Poppy read the letter, she had burst into tears. The letter told the same as Cindy said in her dream last night. Cindy had gone.

“Why she has to leave me?Could you please tell me reason, Jack ?”

”Cindy was a angel from the heaven. Her job is to help the helpless to be strong, help them find their confidence to live. She leaves us, because there is someone else need her. Poppy, be tough. Cindy is confident to you. And she believes that you have the courage to live in the world. ”