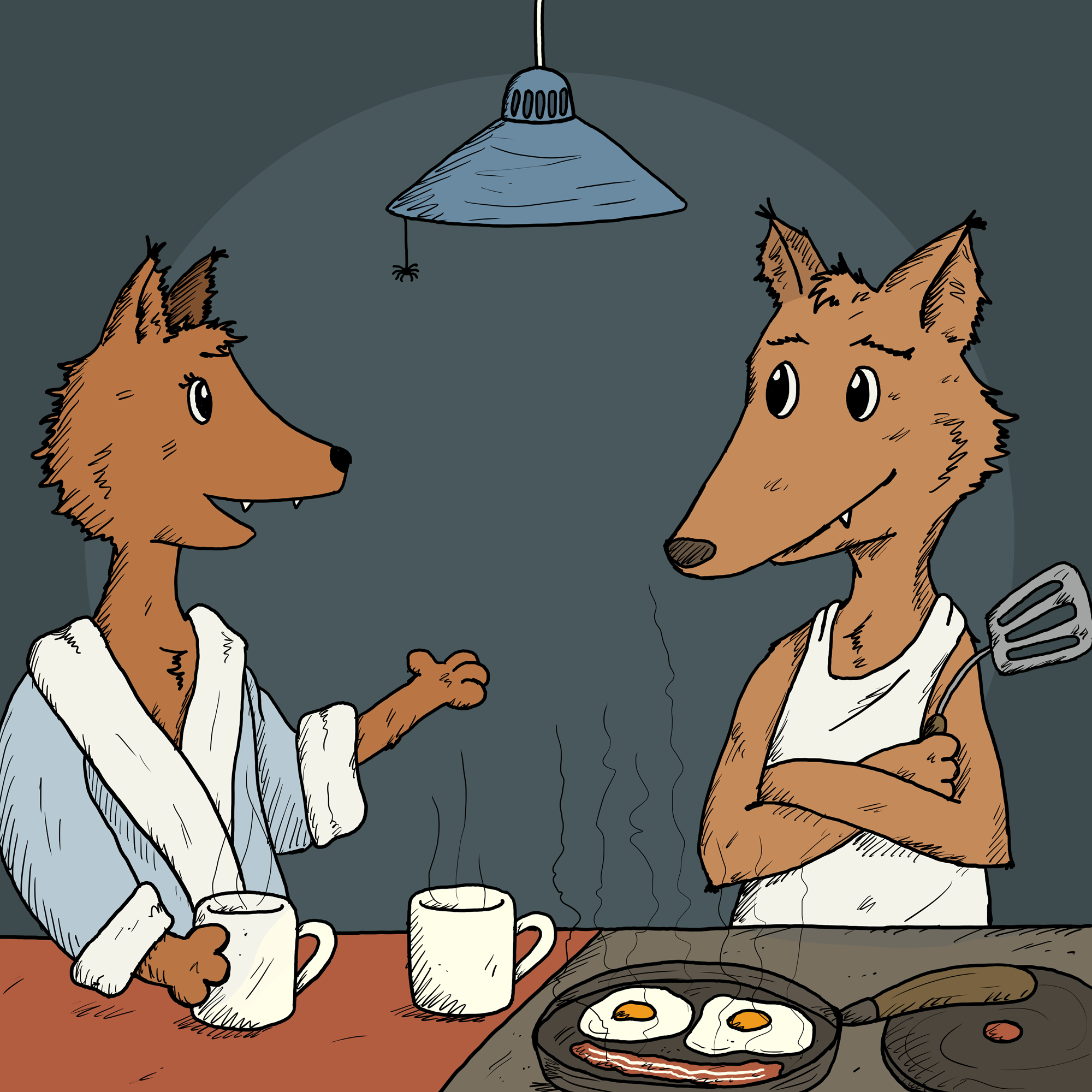 Max showered, put the coffee on and fried up some bacon and eggs. He was out of bread so he used bagels. Which reminded him. Monica was Jewish.

“Hey Monica, you’re not a proper Jew are you?” he called out. “You eat bacon, right?” The shower curtain flew open.

“Of course I’m a ‘proper’ Jew. I eat Gafilte fish out of choice.”

“Right. So you don’t want the bacon?”

The coffee was strong, and Max was feeling slightly more alive. He’d already finished his bagel and was now watching Monica, the Jew, wearing his dressing gown and tucking into her bacon bagel with relish.

“So,” she said, her mouth half full. “What do you actually do with your days?”

“Depends on the day.”

“Today, for instance. What are you going to do today?”

“Today, I have a deadline. But I think I’ll go to the track.”

Max finished off his coffee, took a deep breath and leaned back in his chair.

“It’s not like ladies day. You don’t get to wear a hat and flaunt about drinking champagne.”

“Yeah, I know,” she said, stuffing the last of the bagel into her mouth.

They got in Max’s beat up Toyota Corolla and set off. He’d lent Monica his spare pair of binoculars, and she hung them round her neck. “We’re gonna be rich,” she said, turning the radio on to some breezy pop tune.

He drove slowly, taking the shortcut through the university, heading down Cleveland street and out on to the parade.

Monica wound down the window and gazed through the binoculars at the office workers on their lunch breaks. Black and white specks jutting out of the sparse greenery.

There were plenty of spaces in the parking lot, so he pulled into one right near the track.

They’d just missed the finish of the first race, so Max headed to the bar and got them both a beer. They sat in the stands, and Max set about studying the form guide.

In the second race they had $10 on the nose with Alfie at $7.80, who bolted in down the straight. They bought more beer and some nuts with the winnings.

In the next two they were second with Nightwatchmen and fourth with Magdalene. Both win bets. They were still $58 up, and consoled themselves with another beer.

“Lady luck’s turning our way,” said Monica. “I can feel it.”

Next up they put $20 each way on Cornelius, who Max said was a sure thing. Cornelius was last out the gate by a long shot and never recovered. It was as if the horse had been drugged.

Counting the beer money, they were in the red. So they bought another beer.

Monica didn’t seem to mind losing, so Max let her have final say over the next pick. He couldn’t decide between Sam I Am, who was the superior horse, but carried the heavier weight, and Timbuktu, on lesser weight but a roughie. He didn’t even consider the other horses. Monica chose Timbuktu, and they put $20 each way.

Timbuktu had a decent gate, and got out well. The jockey kept her out of trouble at the first turn and she sat comfortably in the middle of the field. On the second she was getting bailed up, and needed some luck.

Coming into the final turn, there was contact on the outside and Sam I Am bolted out front in the clear. But the contact had opened things up for Timbuktu and on the straight the jockey brought the whip down hard, and Timbuktu kicked through the gap.

Monica leapt out of her seat, spilling beer down her front. It was looking like Sam I Am had shown too soon. Timbuktu was catching fast. They both screamed as the horses bore down on the post. It was close, but Sam I Am held on.

They sat back down in their seats, Monica putting her head in her hands.

“Lucky we bet both ways then.”

“We still won?” she said, looking up.

“Sort of. It’s like betting on the almost winner.”

“I could really get into this,” she said. She headed off to the bar, coming back with two more beers.

There were two races left in the day, and now they were thoroughly drunk.

They pooled their remaining money together, which amounted to a few notes and a handful of change, which Max saved for future beer provisions.

Max didn’t even bother looking at the card for the race.

“I have a feeling,” he said. “Come on.” He led them down to the parade paddock to watch the horses being presented.

“Look at that one,” said Monica, pointing at a sleek black stallion. “I bet he’s the favourite.”

“I hate the favourite,” said Max.

A grey flecked horse was led past them by its trainer, dressed in a plain grey suit.

“Jesus,” said Max, a little too loudly. “Look at how fat that trainer is.”

“I think he weighs more than horse. He must eat all of its food.”

Monica grabbed his hand and squeezed it tightly.

“We must bet all our money on that horse. In solidarity of its sufferance.”

Max nodded solemnly. At the nearest bookie he placed their cash in the assistants hand and said, “All our money on that grey horse with the fat trainer.”

The assistant tipped his hat. “Lunatic?”

“Who you calling a lunatic?”

“Oh,” said Max, squinting up at the board of odds. There it was scrawled in chalk for the world to see. Lunatic.

The bookie handed over the ticket, and they headed over to the finish line to get a good spot.

“Wait here,” said Max. When he came back with two more beers the fat trainer was standing next to Monica.

“Max,” she said, doing an impression of a sober person. “This is Albie. Or is it Albert?”

“Albie was just telling me that we’re in with a shot.”

They both looked at the trainer. A broad smile tore across his face, the sheer extremity of it tying his double chin in knots.

“I’m not gonna lie to you kids,” he said. “Lunatic’s about as rough as they get. It’s good odds though, right?”

“Well, that’s the truth there lad,” he said. “But they say every horse has its day.”

“We’re about to find out,” said Albie, navigating his considerable frame to face the track with a series of curt steps.

The starting gates cracked open and out jumped the horses. Lunatic sat in fifth coming up to the first turn.

As the horses trampled past, Monica flung her arms in the air, screamed “Lunatic”, and splashed beer on the grass.

Coming up to the final corner it was anyone’s race. Then the black stallion they’d spotted in the paddock took off coming into the straight.

“That thing has a fucking jetpack,” said Max.

“That’ll be the favourite,” shouted Albie.

Lunatic looked to be in a race. Then the favourite hung up. It was like it had run into a ditch. The group quickly swallowed him up, spat him out and pounded towards the line as one.

Max put his hands over his eyes and Monica dropped the rest of her drink as Lunatic thrust his neck out and leaned over the line first. A winner by a nose.

She jumped on Max, but he put her down. He was watching Albie, who was watching the course intently. His tiny eyes were flicking from horse to horse.

“That favourite pulled up on purpose, didn’t it?”

Albie kept his eyed fixed on the track, his chest heaving.

“We just bet on a rigged race. No bookie’s gonna pay that.”

A gunshot rang from the paddock behind the track.

“Ah, sure they will,” said Albie, exhaling loudly. “Now there ain’t no favourite.”

They hopped into the limousine, Monica diving straight for the mini bar.

“I think I know the place,” said the driver.

“Look what happened when I ate bacon,” said Monica, popping the cork on the champagne.